Article and Photos by Rob Kenning

With planning underway from the beginning of March 2016, this event was planned to be bigger and better than 2014, and it was. With overseas Artist Blacksmiths, Terrance Clark and his very talented daughter Rebecca Knott invited over to drive the creation, it turned out to be greater than anyone expected.

With a very intricate project devised and designed, there were to be  challenges presented that piqued the enthusiasm of our project smiths.

The theme of the sculpture was based on the mighty Murray River and the town of Mannum. Multiple panels were to be stamped with motifs of the river environment and the mark of mankind on the development of the river system over the ages.

With twenty odd blacksmiths working as a unit, punches were formed, panels were stamped and a mosaic and story emerged from the fire.

For many of the ABASA members, the work began on the Friday 18th. The equipment was delivered the previous weekend and the day began at 10am, with the setup of the forges and layout of the working spaces. With the additional support of the Mannum Council and Museum workers, the event structure developed through the day in readiness for the early start on Saturday.

The Friday evening meals were prepared by the fantastic catering group, led by Jeanette Kenning. A selection of Terry and Margaret Johnson’s fabulous curries and a BBQ cooked by the dedicated catering crew were served to the hungry group.

With a fantastic weather outlook for the day, the project smiths assembled in the museum media room for a project presentation by Terrance and Rebecca. This brought everyone up to speed on the project and the steps required to achieve the outcome.

The forges were then fired up and the forging day began. John Fergus had created some trophies for an additional competition involving the forging of pokers, bottle openers and door handles. Those smiths not involved in the project, were invited to forge some items to be included in the competition.

We were lucky to have our interstate colleagues over for the weekend, including Andy Jagger, John Williams, Ray Gard, Frank Robinson, John Cawthorne, Kieran Gleeson and Corin Urquhart. Corin bought over his mobile shop trailer stacked full of tantalizing goodies for the gear hungry smiths.

As the day progressed the project in the main marquee began to take form. With the smiths working in teams the stamp making and stamp forging began in earnest.

There were many smiths involved with the creation and all smiths were encouraged to work in pairs or as a team as there was a lot of sledge hammer work to undertake to get the forms firmly set into the ironwork  panels. The panels were placed on timber stumps prior to stamping to provide a soft base for the impressions.

The time factor was an issue besides. We only had two days to create the elements, and the two days went very fast, as not all of the smiths worked at the same rate. However, 90 percent of the artwork was completed by the end of the event. The warm weather and even warmer event marquee proved to be a challenge and the catering ladies were kept busy with supplies of bottled water for the troops.

The judging for the best panel was held Sunday afternoon. The blacksmith group awarded  1st Prize to ABASA Member- Merv Lewis, with his stand of gum trees with fallen leaves.

We had the judging for the best poker, door handle and bottle opener as well and the winners were:- 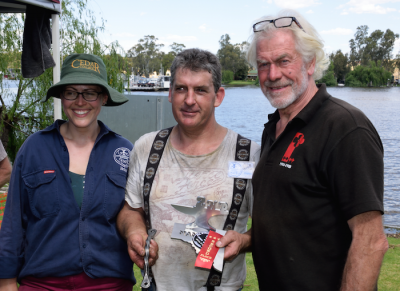 This year, the forging was spread into three areas. There was the main marquee with the project underway. A set of forges for the freestyle work and then the forges over in the original forge shop in the museum. This gave the public a good range of forging activities to observe, although some were mystified by the work in the main tent. Watching the forging and shaping of punches is a little out of the ordinary as an activity. There were a few smiths on hand to explain the process to the inquisitive on lookers.

Some of the highlights from the weekend were the boats and engines and other vintage memorabilia that was on display. On Saturday night there was a Gourmet BBQ meal at the rowing club. The meal was held mainly out in the open and was very informal compared to the 2014 event, but the weather was perfect for the meal and the entertainment.

The weekend event proved of great value to our members and friends and learning skills from the masters is an experience of a lifetime.

Stay tuned for more on Mannum and our Penfield workshops.